"Let’s take the example of Algeria.

We know of Ben Bella, Ben M’hidi, Boumediane and other key FLN figures. We even know Ali la Pointe’s story through The Battle of Algiers [2], but we don’t know much about the women who were amongst the front liners in the FLN struggle. Djamila Bouhired, we just know her as the woman who bombed the café. But Djamila Bouhired, to get to that point of bombing the Cafe, had a whole history with the FLN. And we don’t know anything about that history. So the woman becomes the figure which is the exception: Oh wow, was there a woman hijacker? Was there a woman terrorist? And that’s why when we were talking with Marie-Hélène, I asked her to get that book Shoot the Women First [3]. [...] 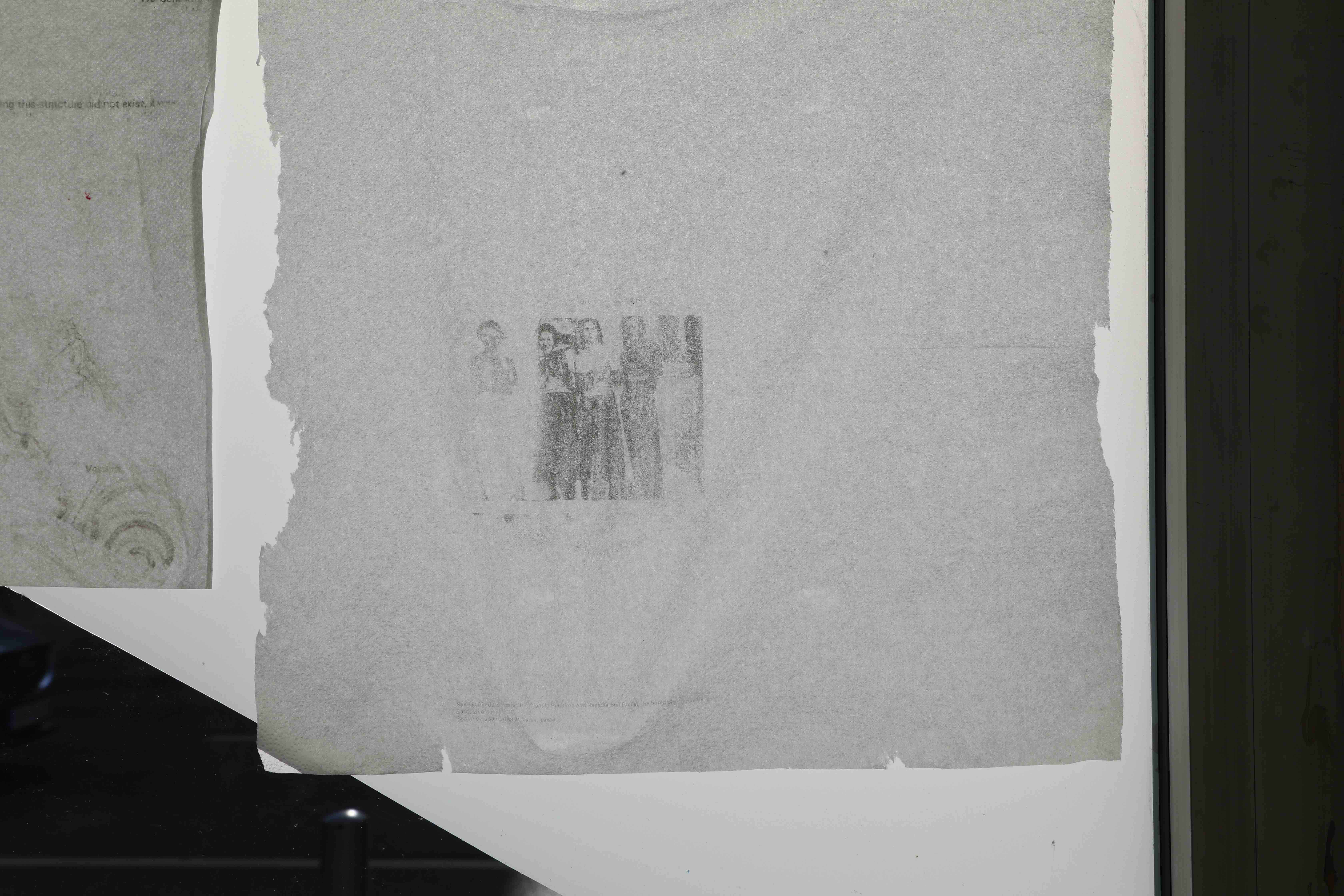 Samia Lakhdari, Zohra Drif, Djamila Bouhired and Hassiba Ben Bouali. Photo: Ali La Pointe. Copy on paper towel by Theresa Kampmeier, exhibited as one part of various traces of the Women on Aeroplanes project at TOR-art space during Zwischenlandung/Stopover. Find the background story of the making of the photograph here.

[...] To get to Shoot the Women First, Eileen McDonald – the angle from which she comes is the IRA. And I was very interested in the IRA at the time. Reading this book about female terrorists, by someone in a position to give insight about them, was fascinating. The provocative title Shoot the Women First is a debate in itself, there are five/ six different versions as to who actually said that famous phrase. The predominantly accepted origin is that the German anti-terrorist squad GSG 9 basically said that when there’s a female terrorist, she is so committed that she has nothing to lose so she will cause the most trouble. Therefore if you come to a hijacking space you shoot the woman first and then there will be less problems.

And so what interested me in that book wasn’t the terrorists, since the words terrorist and terrorism had a different resonance at the time, in the 1970s and 1980s it was clear that today’s terrorists would be recognized as tomorrows’ freedom fighters. What interested me was why she chose just the women because it was so unusual, even for her, that a woman can be a terrorist. So that “function” was somehow reserved for men. This book basically inspired me to look deeper into the females of liberation movements: How did they get into and commit to a liberation movement? How they decided to go into the bush, which entailed leaving their family, sometimes their children and breaking with traditions? But mostly, why none of these women ended up as part of the power structures that emerged once independence was obtained?"

(Jihan El-Tahri, The idea of sitting around a negotiating table, edited transcript of a lecture given during the Editing/Filter session in Berlin, December 2017)

Assembled for a lecture given at the University in Greifswald, within the context of Interdisziplinären Zentrums für Geschlechterforschung  Vor den Verhältnissen – Wie lässt sich schreiben an Zohra Drif, Algerien? Ein Brief von Hélène Cixous. Selected and edited by Annett Busch.